Home Society Politics John Adams and the eventful journeys of two US presidents through the... 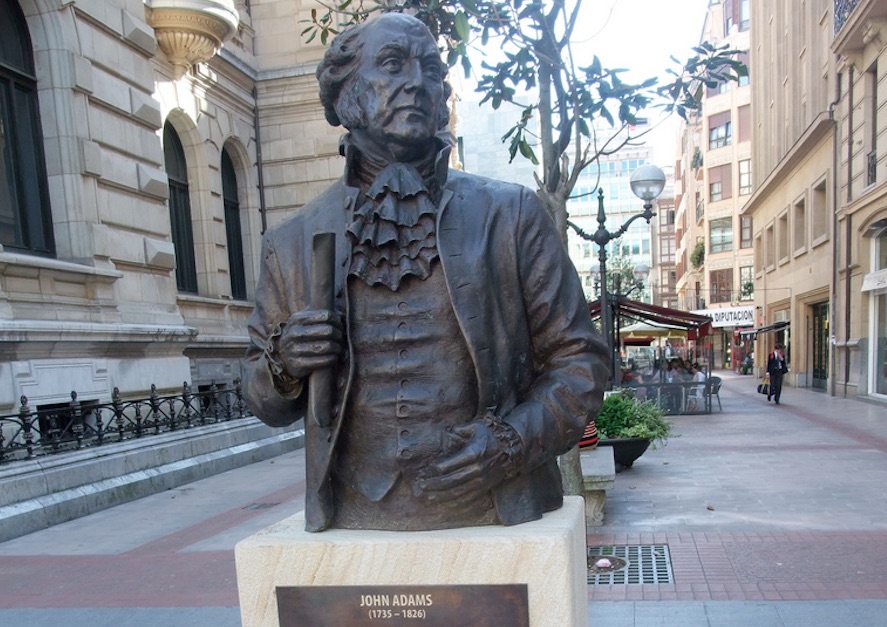 A few days ago, we discussed an article Vince J. Jauristi, a Basque descendent born in Elko, Nevada, published in the Elko Daily about the meaning of the presence of Basque culture at the 2016 Smithsonian Folklife Festival.

That same day, that same paper published another article by the same author telling the story of John Adams (who we’ve mentioned many times on our blog) to the northern part of the Iberian peninsula, from Ferrol to the Pyrenees, on his way to Paris.

The protagonist of this tale was, at the time, a patriot for a nation fighting for its liberty, with the help of two absolutist kings, Charles III in Madrid and Louis XVI in Paris.  Today, curiously, Adams would, in the eyes of the government of the Kingdom of Spain, be a subject of the King of England who had the shame to be fighting for independence from a kingdom that offered its loyal subjects a much more democratic system of government than could be found in the Reino de las Españas at the end of the 18th C.

Very similar to the situation the Basques live today, even though they are so lucky as to live in the two models of freedom, modernity, and democracy that are Spain and France, they have to shame to want to exercise their right to self-determination which, as everyone perfectly knows, can only be exercised by people who’ve been colonized and live outside of Europe.

John Adams was one of the Founding Fathers of the US, and its second president.  At the end of 1779, he was traveling to France as a special envoy of the US Congress aboard the French frigate Sensible.  The journey was made difficult by the chase British ships gave and by the bad weather.  Eventually, they took refuge in the port of El Ferrol.  Given that the boat would need months to be repaired, Adams decided to make the trip from Ferrol to Paris on land, in the middle of December.

This was a decision that would take him on a difficult journey through lands that were being exploited by an absolutist government whose interest were contrary to its people’s.  That was, until he arrived at Orduña.  From then, Adams’ journals take a 180º turn to what had come before.  There was no border, no clear indication, but those American patriots realized they’d entered another country, that of the Basques.

We really recommend you read Juaristi’s article well.  It tells all about what the signer of the US Declaration of Independence thought as he went on his way from Ferrol to the home of José Gardoqui in Bilbao.

There, he discovered how the Biscaynes had confronted the royal authority, like the citizens of Boston, to oppose an unjust tax that went against local interests.  In Massachusetts, it was called the Boston Tea Party; in Biscay, it was the Salt Tax Revolt.

He also discovered how the Foral system the Basques used to govern themselves with worked.  It was such an important discovery that it would appear years later, in his Defense of the Constitutions of the United States, published in London in 1787.  In that book, Adams dedicated an entire chapter to the Foral Democratic Republic of Biscay.  Without a doubt, that is an unbeatable description from a neutral third party about the relationship between Biscay and Spain and how that “Democratic Republic of Biscay” governed itself.

As we were saying, we recommend all our readers take a close look to this magnificent article by a Basque-American to discover what an American patriot thought of the Basques.

Now, some of our more astute readers might be puzzled that we’re ending the story here, as the title referred to two US presidents who visited the Land of the Basques.  And that’s true, because John Adams, the second president, was joined on that journey through Bilbao by his son, John Quincy Adams, who would become the sixth president of the US.

“Providence has favored me, with a very unexpected Visit to Spain,” wrote John Adams to his friend, James Lovell, on December 16, 1779. Over the next month, this landing on Spanish soil would test Adams like few journeys in his life, and yet afford him a surprise glimpse of the Basque, a people with such “a High and independent spirit, so essentially different from the other Provinces” that he would recall them years later during America’s struggle for a new constitution.

And, for those who might be interested, here’s the beginning of the Declaration of Independence, whose fathers include John Adams and Thomas Jefferson.

IN CONGRESS, JULY 4, 1776
The unanimous Declaration of the thirteen united States of America

When in the Course of human events it becomes necessary for one people to dissolve the political bands which have connected them with another and to assume among the powers of the earth, the separate and equal station to which the Laws of Nature and of Nature’s God entitle them, a decent respect to the opinions of mankind requires that they should declare the causes which impel them to the separation.

We hold these truths to be self-evident, that all men are created equal, that they are endowed by their Creator with certain unalienable Rights, that among these are Life, Liberty and the pursuit of Happiness. — That to secure these rights, Governments are instituted among Men, deriving their just powers from the consent of the governed, — That whenever any Form of Government becomes destructive of these ends, it is the Right of the People to alter or to abolish it, and to institute new Government, laying its foundation on such principles and organizing its powers in such form, as to them shall seem most likely to effect their Safety and Happiness. Prudence, indeed, will dictate that Governments long established should not be changed for light and transient causes; and accordingly all experience hath shewn that mankind are more disposed to suffer, while evils are sufferable than to right themselves by abolishing the forms to which they are accustomed. But when a long train of abuses and usurpations, pursuing invariably the same Object evinces a design to reduce them under absolute Despotism, it is their right, it is their duty, to throw off such Government, and to provide new Guards for their future security.

“Batiburrillo”, the typical Paraguayan dish invented by a Basque