Home The World and the Basques Basques in the world Yolande Betbeze, the “Basque spitfire”, a “revolutionary woman” who was Miss America 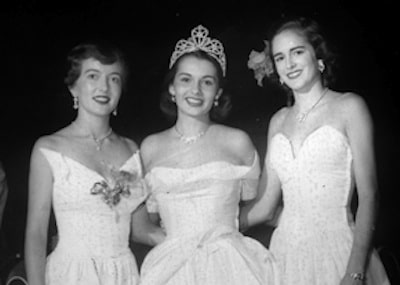 We happened to come across, on a Smithsonian Insitution webpage dedicated to the History of the United States, the history of the Crown of Miss America 1951, which told us about an extraordinary Basque-American woman.

Yolande Betbeze was born in Alabama in 1929.  She grew up in a strict Catholic household of Basque descendants, was educated in a nuns’ school, and was a talented opera singer.  But her fame skyrocketed in 1951 when she was voted Miss America, the first non-Anglo-Saxon dark-skinned woman to be voted.

From that moment on, the life of Yolande Betbeze turned into an example of a person’s struggle to defend her convictions.  As the Smithsonian’s website explains:

Of Basque heritage, Betbeze tested the limits of a system that in the 1950s was still basing its standards on an ethnically and racially narrow definition of feminine beauty. Betbeze would go on to continue testing the Miss America institution with her refusal to parade in a bathing suit and, after her reign, with her advocacy of women’s and minority rights, her political activism, and ultimately her generous donation of this, her original 1951 crown, to the Smithsonian Institution in 2005.

Or, as the Alabama Encyclopedia writes:

After her one-year reign as Miss America, Betbeze served as an ambassador to Paris, was active in the NAACP, CORE (Congress of Racial Equality), and SANE (The Committee for a SANE Nuclear Policy), and studied philosophy at the New School for Social Research in New York City. She continued to sing, appearing with the Mobile Opera Guild (now the Mobile Opera), and helped found an off-Broadway theater. Betbeze married Matthew Fox (of Fox Motion Pictures fame), with whom she had one daughter. She currently lives in Washington, D.C., where she is prominent among the city’s political elite.

We’ll leave you with the links to pages of the Smithsonian, Miss America, the Alabama Encyclopedia, and Wikipedia.  All of them highlight her principles, her character, and her commitment to civil rights.

Yolande Betbeze, “the Basque spitfire,” surprised Atlantic City and the nation in 1951 when she was named Miss America. The former Miss Alabama beat out over forty fair-haired, fair-skinned state champions with her dramatic singing performance and her undeniable Iberian beauty. Of Basque heritage, Betbeze tested the limits of a system that in the 1950s was still basing its standards on an ethnically and racially narrow definition of feminine beauty.

In Yolande’s words, she made a stand for “propriety” that has gone down as a significant flash of pageant history and altered the course of its future. Yolande entered the Miss America Pageant for the scholarship opportunity it presented. Having spent the previous years of her life in convent schooling, posing in a swimsuit was heretofore unheard of for Yolande. After winning the Miss America title, Yolande declared, “I’m an opera singer, not a pin-up!”

In 1950, the Miss America Pageant crowned 21-year-old Mobile native Yolande Betbeze (1929- ) as “Miss America 1951.” She would inadvertently go on to reshape the pageant’s format by refusing to wear a swimsuit during her reign. Lauded as a feminist hero, Betbeze forever changed the Miss America pageant and was later an active participant in the civil rights and anti-nuclear movements.

Yolande Betbeze was born in 1929 to William, a butcher, and Ethel Betbeze of Mobile. Betbeze was raised in a strict Catholic family with Basque origins and was educated in a convent school.